Encompasses biophysics, biophysical chemistry and physiology with the emphasis on the following:

Includes the development and implementation of scientific and technical cooperation with republics of the former USSR, especially with the Russian Federation.

Honourable Mr. Radenović,
I was very pleased when I have seen that you created your website. Congratulations on everything you put on it, because it is all based on facts. It is my opinion that the form of the site is very good and that it presents a realistic image of you. I am sure that there is no a single scientist at the Maize Research Institute, Zemun Polje, who was/is as a systematic and prolific scholar as you in the 70-year long history of its successful activities.
Since I have worked together with you for almost 35 years, I would like, with great pleasure, to point out to certain facts about you. I think that some facts differ from those on the website and that it is more adequate if somebody who used to work with says something abut them, so I dare to do it.
* You are my colleague from whom I learnt a lot about managerial activities of the Institute. Therefore, I wish to use this opportunity and express my great gratitude. Your system of work was based on the following: you initiated an idea, asked for opinions of your associates, accepted everything that was better than your own idea, told other people what to do, controlled work and when the task had been accomplished you were always ready to emphasise the contribution of each individual to the realisation of the work. All your colleagues highly appreciated your system.
* You were an initiator and a person responsible for many tasks that were beyond the scope of your scientific field, but they were of great importance for the successful operations of the Institute. I will specify just some of them:
– Planning, supervision of the construction and equipping of the pavilion of Plant Physiology Department.
– Complete managing the implementation of the project and construction of the premises for the Experimental maize breeding station on Planinica nearby Valjevo.
. Participation in managing the construction and equipping of the building of the Plant Breeding Department in Zemun Polje.
– Participation in managing the construction and equipping of premises in Experimental Farm Estate in Krnješevci.
– Participation in construction of Seed Drying and Processing Plat in Zemun Polje.
– Active participation in construction of the Feed Factory in Valjevo.
– Adaptation of premises and storage rooms in the Experimental Field in Zemun Polje.
– Renovation, construction of another story and equipping of the old administration building of the Institute in Zemun Polje.
– Complete supervision of the adaptation of premises and storage of the former Institute of Engineering after its merging with the Maize Research Institute.
– Arranging the complete storage room and building within the basic seed drying plant in Zemun Polje.
– Construction of parking lots and fencing the Institute’s estate in Zemun Polje.
– Designing of the project and organisation of landscape areas around the Institute in Zemun Polje.
There were many other activities performed by you that proved you a great organiser and excellent executor. Nonetheless, all the stated is a sufficient proof of your commitment, active participation and great contribution to the development of the modern Maize Research Institute, Zemun Polje.
At the end, I am very well aware that you, together with the leading people of the Institute, were one of creators of the modern organisation of the maize seed production system that is still used and is the main reason of the successful operations of the Institute.
I WISH YOU ALL THE BEST. CORDIALLY AND YOURS RESPECTFULLY,
Dr. Živorad Videnović, scientific advisor
Maize Research Institute, Zemun Polje

It is our great pleasure to look back at our long-term cooperation and to write down some of our memories.

For Professor Čedomir – Čeda Radenović it may be said that he is a man of the world, recognised expert in the field of detailed research, as well as a scientist of European values. Then again, he is our man/one of us, a man from the south of Serbia, born at the foot of Radan, in Pusta Reka. As far as 1948, he started his education and scientific training first in Leskovac where he completed elementary and high school. Then he moved to Belgrade where he continued his education, gained scientific and university titles, settled down and formed his family. Leaving Belgrade, from time to time he visited some important world’s scientific and university centres. The longest training course he attended was organised by the Lomonosov Moscow State University.

Čedomir Radenović has always returned to his south of Serbia, to Pusta Reka and his Radan. He has been always there for his citizens and young experts from the southern Serbia when they needed him, except for short intervals. However, since the mid-1970s Dr. Radenović together with his associates from the Maize Research Institute, Zemun Polje, has been more organised and officially visited the south of Serbia, particularly Leskovac and Vranje. In the beginning, their visits were professional and educational related to maize generally, then to hybrids, production technologies, regional distribution of hybrids, and the like. In particular, panel meetings at the beginning of the growing seasons were very well organised. After this quality and purposeful beginning, Dr. Radenović came up with the idea to start more serious business and activities. Alongside with the experts working at the Maize Research Institute, Zemun Polje, he has launched a great project “The Improvement of the Grain and Silage Maize Production – A Development Factor of the Livestock Production in the South Morava Region”. This Project, after the usual, but short procedure, was accepted and approved by local cooperative farms, agricultural enterprises, combines and local self-government, and then by the Regional and Republic Scientific Associations, Republic Fund for Development of Underdeveloped Areas and the Ministries of Science and Agriculture. The implementation of the Project started at the end of the 1970s and in the following five-six years, a great team with the top experts within the fields of maize production led by Dr. Radenović was permanently present assisting the local agricultural technical staff and farmers. Officially, 10 doctors, five masters, and eight graduates participated in the Project. Unofficially, there were many more, as it may be seen from the three published publications, books of proceedings, based on the activities related to the subprojects. The stated proceedings were published after the completion of certain tasks and subprojects and they represented the reports on activities performed in a certain period. These proceedings encompass scientific papers and technical reports within certain fields written by more than 50 authors. In fact, these fields were subprojects of the main Project such as follows:

Approximately 70-100 variety, production and demonstration trails were set up per year, mainly in farmers’ estates, as well as in certain agricultural organisations and combines that had field crop production. At the end of each production year, meetings and seminars with 40-130 participants were held in various villages in the region of Leskovac and Vranje.

According to the evaluation performed by the operational services of the South Morava region, maize hybrid yields, due to activities based on the Project and subprojects, were 2 to 2.5 fold-higher. Furthermore, other positive and important results based on the set programme, were gained, and since the 1970s, maize landraces ceased to exist in the South Morava region.

Upon the completion of the Project, the presence of Čeda Radenović continued and lasted until nowadays. At the same time, the intensive cooperation with the Maize Research Institute, Zemun Polje was also continued including trials, testing of hybrids, regular meetings at the beginning of the growing season, as well as visits of trials and production areas during the Field Days when newly developed and high yielding maize hybrids had been shown. Needless to say, in most cases Dr. Radenović was present. Now, Professor Radenović helps young experts and PhD students by providing them with literature and direct advices and guidance based on his rich experience.

While we are on the subjects, it is worth mentioning that Professor Dr. Radenović used to be a lecturer at the Faculty of Technology in Leskovac for about five years. In addition, he used to observe research and development activities in the Agricultural Technical School, as well as in companies Zdravlje and Nevena.

Professor Dr. Čedomir Radenović was and still is, whether in Belgrade or Radan, available for all experts of this region for anything they need. 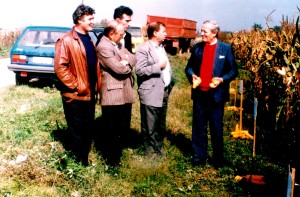 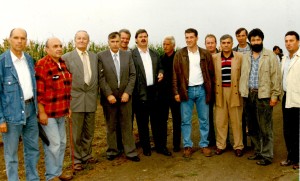 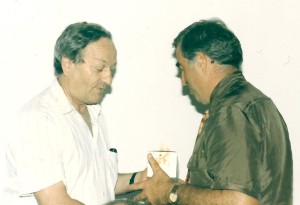 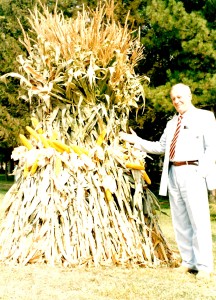 We wish you all the best,
dr Dragan Todorović and
Boban Stanković